In our last poster you read about VE Day being announced from the Town Hall steps and how the whole area was packed with revellers. But celebrations were not limited to Bank Park, they took place all over town. 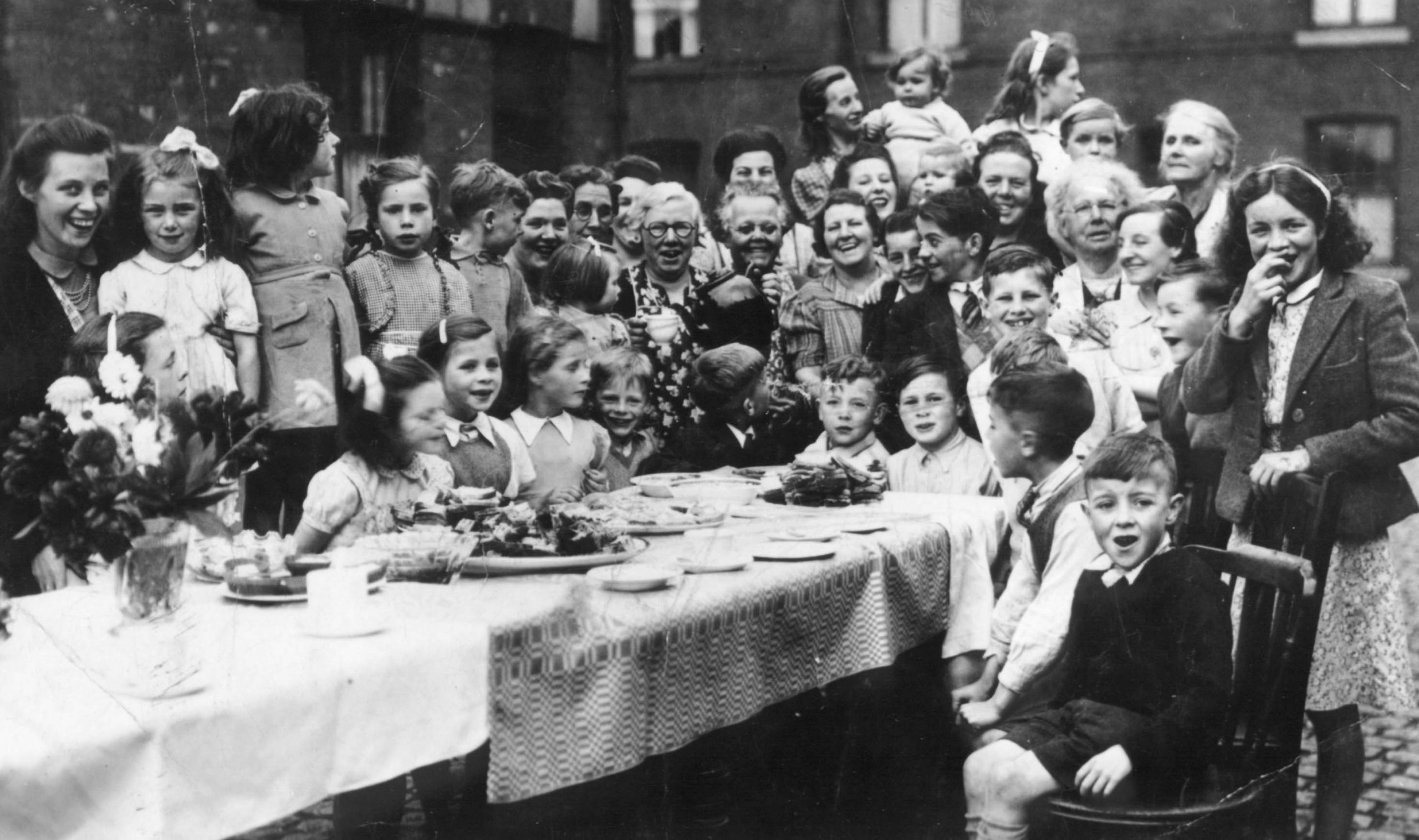 The council provided floodlights at Market Gate and party-goers described the “blaze of colour” from the Corporation’s Electricity Showrooms. Hodgkinsons on Bridge Street lit up their premises with special illuminated shop displays and nearly all of the businesses in town centre hung flags and banners. 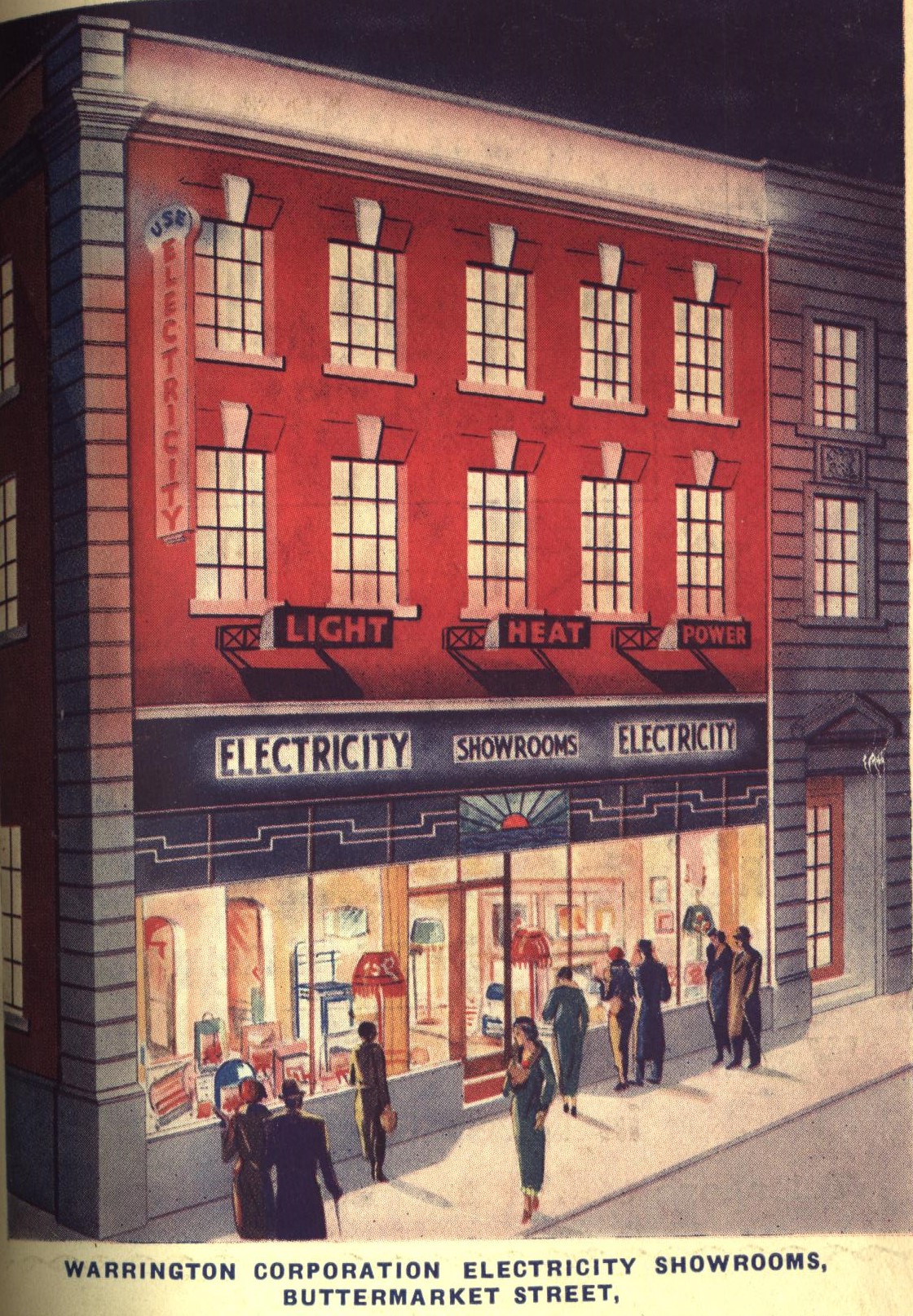 The newspapers report that almost every house in town had either a flag or bunting, and that where these couldn’t be obtained, people had drawn their curtains wide open and put on all of the lights in the house. After years of black-out enforcement seeing places lit up was like a rare treat.

Street parties were amongst the most popular celebrations, despite the bad weather. In most streets supplies of scarce food were pooled by residents in order to give the district’s children a decent party meal. The Examiner reports that in Marbury Street at Latchford, after the children had sat down to their tea, there was enough food for a second “spread” for the adults.

The street parties weren’t all about food, there was also entertainments. Gramophones, radios, and pianos were hauled out into the streets so that people had music to dance to.

Longford street, who had started their party on Monday night, the day before VE Day, had dancing to radiograms around the tables, which continued well into Wednesday evening. As well as the music, Longford Street was entertained by Mr. Mullins who impersonated “Hitler the painter” and later danced in his bathing costume and performed a strip-tease.

The following description of a party held in Garibaldi street shortly after VE Day gives a good idea of what the parties were like:
Cakes, trifle, sandwiches, jellies, blancmanges, and countless other things loaded tables in the street, and around them all were seated 80 children. Sergeant Weedon, who is a cook in the RAF, spent his 48 hours leave in baking and decorating fancy cakes and a beautiful iced victory cake. Sargeant Weedon has lost two brothers in the War – one in Malta and one in Burma. Tables and other furniture were kindly loaned by the Crosfield Centenary Club. After tea there were races, games, and community singing followed by ices, sweets, chocolate, oranges, and minerals. As it was getting dusk a jazz band paraded the streets and attracted crowds until a storm broke.

A Street Party in Howley

Bonfires and effigies of Hitler or other leading enemies were a common theme of the celebrations with the effigy taking the place of Guy Fawkes on the bonfire. In Battersby Lane effigies of Churchill and Stalin were added to the scene, watching from chairs as Hitler went up in flames.

Speaking in court at Stockton Heath Sessions held on VE Day, Colonel H. Gordon Roberts JP, stated that he did “not agree with the jollifcations” saying that he could not see how any man could turn himself to jollifications while brothers and husbands were still serving in the East, adding that “we ought to have waited until the whole thing is over”.

Colonel Roberts’ comments are an important reminder that whilst peace in Europe had been declared, for many the War would not be over until VJ Day (Victory over Japan Day). If you follow this series of posters you will learn more about Warrington’s reactions to VJ Day and about the many prisoners of war who start to gradually return to the town in the months after VE Day.

Our next poster will look at the celebrations in some of the outlying districts of Warrington.

For special offers and information, sign up to our newsletter